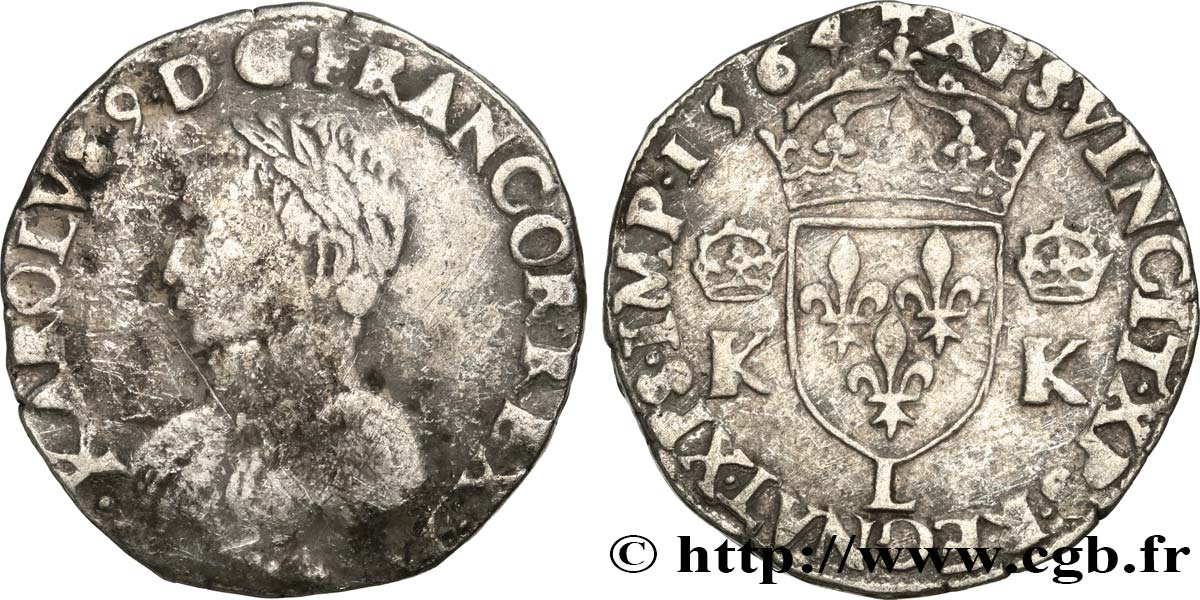 Born in Saint-Germain-en-Laye in 1550, son of Henri II and Catherine de Medici, Charles IX succeeded his brother Francis II in 1560 at the age of ten. His mother therefore exerts the regency, and his cousin Antoine de Bourbon lieutenant general of the kingdom. His "reign" begins with the States General met in Orleans in December 1560 - January 1561 and the Colloquy of Poissy (October 1561), which allows the exchange of ideas Catholic and Protestant. In January 1562, the Edict of Saint-Germain Reformed gives a quasi-religious freedom outside walled towns. The civil war between Protestants and Catholics began with the massacre of Vassy (March 1562), where the Duke of Guise slew Reformed gathered in a barn. In reply, the Prince de Conde took up arms and seized several towns. Forced to take sides, Catherine began to head Catholic. Massacres answered the massacres and Protestants profaned churches and tombs. All France was soon destroyed by the troops of each other. At the Battle of Dreux (December 1562), Guise gave victory to the Catholic camp, but he was assassinated a few months later, in February 1563. The edict of pacification of Amboise, in March 1563, was negotiated by Montmorency, for Catholics, and Condé, for Protestants. He gave freedom of worship and a noble city Bailiwick. Charles IX was declared major in 1563 and his mother tried to re-establish the royal authority. The order of Moulins (1566) including decreased power of parliaments and governors. To restore harmony, the Queen Mother gave to his son a long tour of France (1564) and led a life of brilliant court. Dissatisfied with the reconciliation of royal power with Spain, unhappy with the implementation of edicts, Protestants projected: to seize the person of the king. The court took refuge at Meaux then went to Paris (September 1567). After a brief respite, disorder and massacres began again. Protestants blockaded Paris and fought the indecisive battle of Saint-Denis (November 1567), where Montmorency was killed. The second son of Catherine, Henry of Anjou, then took command of the Royal Armed. Peace was signed in March 1568 in Longjumeau: the provisions of the Edict of Amboise were restored. In the context of the Tridentine reaction, the Catholic party then began to bounce back. Mendicant orders and the Jesuits were broadcasting the watchwords. Armed brotherhoods were created. The Duke of Anjou defeated and killed Condé at Jarnac (March 1569). Despite the help of German Protestants, the Protestants were defeated a second time Moncontour (October 1569). A new edict of pacification, signed at Saint-Germain, intervened in August 1570: the Protestants received four cities safe: La Rochelle, Montauban, Cognac and La Charité. The Lords reformed reappeared at court and Coligny became the favorite of Charles IX. Jealous of this competition, Catherine decided loss of Admiral. In favor of the marriage of Henry of Navarre, nominal head of the Protestant party, Marguerite de Valois, the Catholic party took advantage of the gathering in Paris many Reformed leaders: it was the massacre of St. Bartholomew (24 August 1572). The king and his mother had been drawn into the case, where the collective fury was the main two thousand victims. The war continued, unforgivable. The south had revolted, with the complicity of Montmorency-Damville Governor Languedoc. The Edict of Boulogne (July 1573), which gave freedom of conscience and freedom of worship assured in La Rochelle and Montauban, could not stop the war. King of a kingdom torn toy events, Charles died without male offspring May 30, 1574, leaving the crown to his younger brother, Henry, King of Poland.