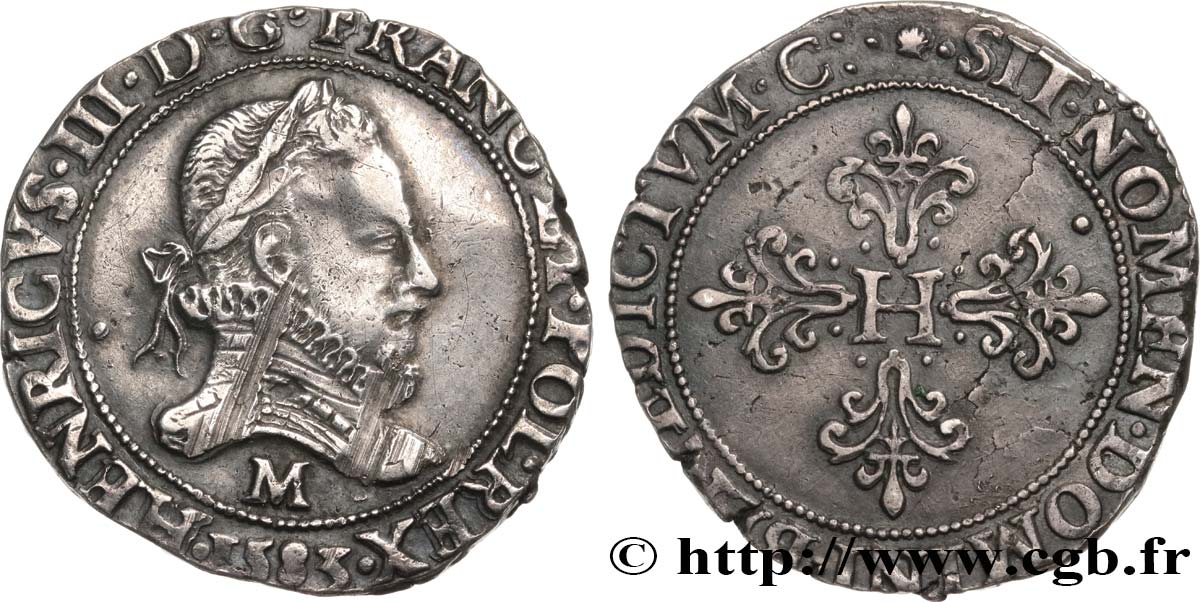 Born in Fontainebleau in 1551, Henry III was the third son of Henry II and Catherine de Medici. First Duke of Anjou, he distinguished himself by his military successes against the Huguenots in 1573 and was chosen as king by the Poles to replace the last of the Jagiellonian. In June 1574, while Catherine de Medici ensured the regency, Henry III fled from Poland. He passed through Venice to regain France. In France, Catherine was very unpopular because of favors that rained down on his Italian creatures (Strozzi, Gonzaga Birague Gondi). The king and his mother found themselves in Lyon and reformed government. The council was restricted number: it was reduced to the queen mother, and Birago Cheverny. The powers of state secretaries were diminished. Crowned in Reims, who married Louise Vaudémont Henry III tried to calm the civil war. In court, the king's party faced her brother, the Duke of Alençon. In September 1575, Alençon fled and went to the head of the Protestant party. In May 1576, Henry III had to sign the edict of pacification of Beaulieu or Peace of Monsieur. Victims of St. Bartholomew were rehabilitated, the Protestant allowed everywhere except in Paris and in the homes of the Court. Eight places of safety and justice rooms mid-parties were granted to Protestants. Damville kept the government of Languedoc and the Duke of Alençon received prerogative in Anjou, Touraine and Berry. The King of Navarre, back in his dominions, abjured the Catholic religion. The Catholic party was displeased with this peace. First Catholic League was founded by Mr. Humieres Peronne, Picardy refusing to receive Condé as Governor. Soon, Henri de Guise League extended this to the whole kingdom, with the recovery program of royal power and the meeting of the States General. To counter Scarface, Henry III declared himself head of the League. The States-General were assembled at Blois in November 1576, without representation Protestant. States having voted for the unity of religion, Protestants took up arms. States also claimed to establish government control and refused to Henri III subsidies he asked. Catherine rallied Damville and the Duke of Alençon, who became Duke of Anjou, heir. After a few Catholics success, a new peace was signed: it was the Edict of Poitiers in September 1577, which put some restrictions on the Edict of Beaulieu. The war resumed in 1580 with the taking of Cahors by the King of Navarre: she was short, Protestants longing for peace, which was concluded in November 1580 to Fleix. The Duke of Anjou transported his ambitions outside, seeking to marry Elizabeth of England and died before Antwerp, which he sought to seize (June 1584). Surrounded by cute and favorites, Henri III tried to strengthen the royal power by bundling its followers around a throne which he tried raising the prestige that is the sense of the elevation of his favorites, and Epernon's Joyeuse, strengthening the label and the foundation in 1578, the Order of the Holy Spirit. Great legislator, structuring the Council but big-spending, failed in the financial reform. After the death of the Duke of Anjou, Henry of Navarre became heir presumptive. Henry III had no children, he was discredited. The Guise rallied behind the candidacy of Cardinal de Bourbon and support underhand Philip III and Pope Sixtus V. The Holy League was formed by the Treaty of Joinville (December 1584). A Parisian league was formed, where bourgeois parliamentary and entered. Elboeuf, Aumale and Mercœur raised the province. Faced with this pressure, the king had to sign, July 18, 1585, an edict of proscription against Protestants. Meanwhile, the pope said Henri de Navarre deprived of his rights to the throne. In October 1587, the Duke of Joyeuse was defeated and killed by Henri Coutras. But the relief army sent by the Protestant princes of Germany was defeated by the Duke of Guise. On 12 May 1588, the latter being in Paris, the city rebelled against the king, who had to flee. In July, Henry III signed an edict of union (Catholic): heresy was prohibited; Navarre excluded from the succession. The States-General, convened at Blois, saw the triumph of the League: King renewed the edict of union and states refused to grant him. To regain control of the power, the King murder Guise (23 December 1588) and his brother the Cardinal of Guise (24 December). States were closed in January 1589. Paris went into open revolt against the king and made him head a council of sixteen. The Duke of Mayenne, brother of Guise, governor of Burgundy, arrived in Paris in February 1589 and was appointed lieutenant general of the kingdom. The province followed. Remained in the Dauphiné Henri III, Bordeaux, Angers, Tours, Blois and Beaugency. Mayenne walking on Tours, the king had an alliance with Henry of Navarre. Soon, Paris was besieged by the two sovereigns. Then a Jacobin monk, Jacques Clément, assassinated Henry III was the first regicide in the history of France. Henri III ends with the Valois dynasty which ruled France from 1328. The crown passed to his distant cousin Henry of Navarre.