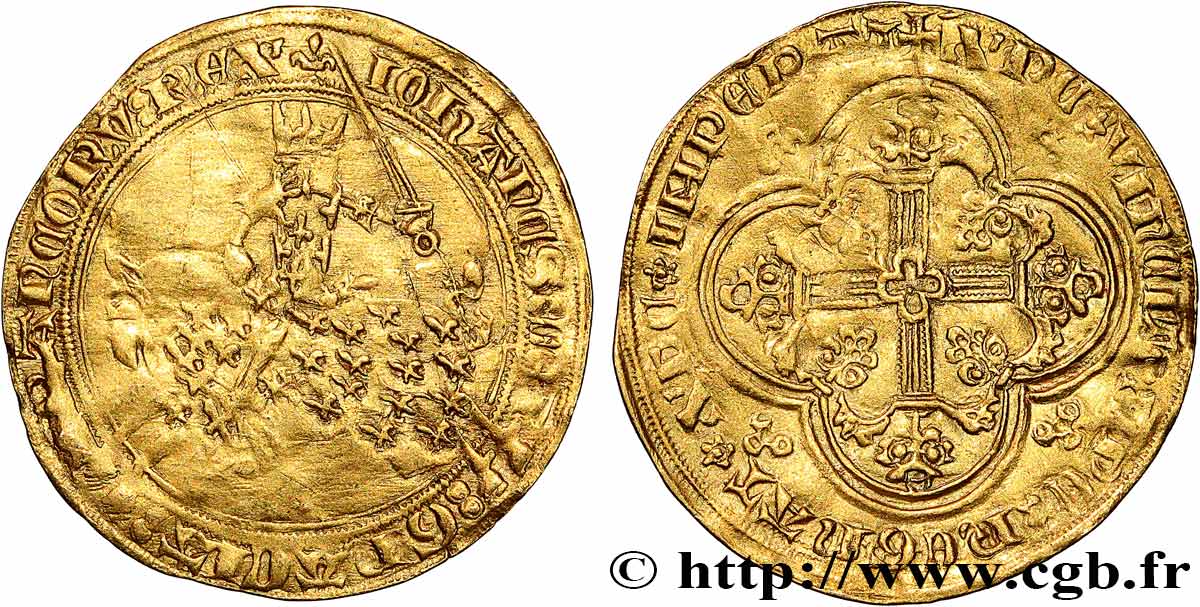 John, Duke of Normandy, ascended the throne of France at the age of thirty-one years, having already had a long experience of military campaigns. From the outset, he alienated Charles de Navarre yielding County Angoulême his favorite, the Constable Charles of Spain. The latter was assassinated by Navarre in January 1354. The following February, Jean had to conclude the Treaty of Mantes with Charles and cede large areas in Normandy. To respond to the creation of the Order of the Garter in 1348, Jean instituted the Order of the Star in 1351. In 1355, the Black Prince, son of Edward III, began the war in Guyenne. His ride took him in Armagnac and Languedoc. At the same time, the British launched raids from Calais. The currency collapsed, the general insecurity was. In December 1355, the States-General assembled in the great hall of the Palais de la Cité. It was decided to levy a tax to fight against the English. His perception was entrusted to "elect" appointed by the States. The following year, new general states were united, always to deal with tax collection. The Bishop of Laon, Robert Le Coq, then tried to draw Prince Charles, Duke of Normandy, against his father. The same year, the English Duke of Lancaster ravaged Normandy. Wanting to put an end to the Prince rides Black, Jean II de Bordeaux cut and forced to battle near Poitiers. The fate of arms was unfavorable to French and John was captured and taken into captivity in England. Charles took the title of king's lieutenant then, in 1358, the Regent. In Paris, the bourgeois were the provost of the merchants Étienne Marcel, an old family of drapers, which the United States 1356, had become the leader of a party that requested the participation of the United States Government. New States-General convened in February 1357 by Charles, were still more unfavorable to the monarchy. Robert Le Coq and his party tended to place the kingdom under control: appointment of General reformers responsible for purifying the administration, frequency of States joined the Council of Delegates of the ten States. February 22, 1358, Étienne Marcel and his followers invaded the Palais de la Cité and murdered the marshals of Champagne and Normandy in the eyes of the Dauphin. Soon, Charles left Paris and summoned the States on May 4 at Compiègne. Plague, uprisings, disorders weary opinion and brought back the side of power. July 31, 1358, Étienne Marcel was killed in his turn and the following month, the Regent returned in Paris. However, anarchy now won all the kingdom. The overlapping of the English captains ransacked the provinces. It was addressed: March 24, 1359, to regain freedom, Jean agreed to pay a ransom of four million ECU and transfer to a large Island Aquitaine in full sovereignty. The Treaty of Brétigny, following May, brought the ransom of three million and territorial cessions to Aquitaine, Calais and Ponthieu. A solemn treaty, signed at Calais in October, confirmed these provisions. Freed, John II decided to leave the Crusade. In August 1362 he left Paris to Avignon. However, the young Louis d'Anjou had to flee to England. True to his word, John gave the government of the kingdom to Charles and returned to London in January 1364 to take the place of his son. He died shortly after.