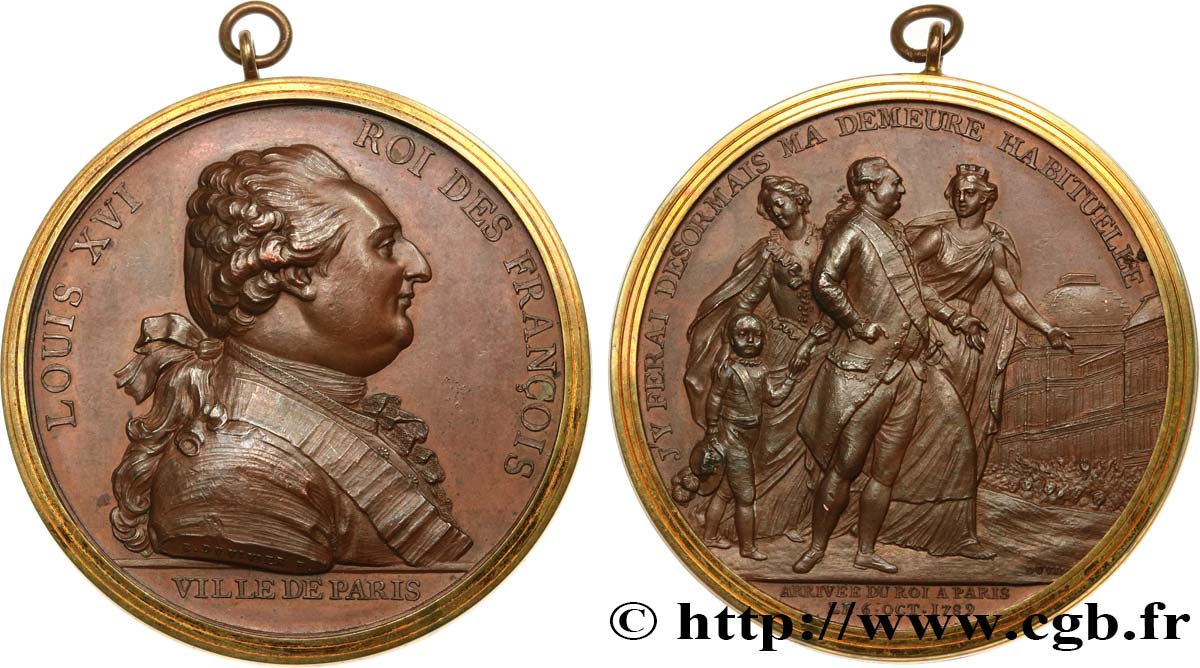 Born in Versailles in 1754, Louis XVI was the son of Louis, Dauphin of France, and Marie-Josephe de Saxe. In 1774, King to the death of his grandfather, Louis XV, he called to him the old Count de Maurepas, disgraced since 1749, and broke up soon ministers of his predecessor, this "triumvirate" formed by Chancellor Maupeou the Terray and the Duc d'Aiguillon, who, by his authoritarian politics, came to restore royal authority. The former Parliament of Paris, suppressed since 1770, was restored. On 24 August 1774, Louis XVI referred Terray and Turgot appointed Comptroller General of Finance. Refusing to be a simple "money collector" during his ministry, Turgot multiplied economic reforms. End 1775, the Comptroller General had initiated the financial recovery: the tax reported 327 million, 67 more than the previous year, the deficit was reduced to 15 million. But his plans were hurting too special interest. Everything was against him devotees, parliaments, the Choiseul party, Queen Marie Antoinette, whose role was incredibly harmful, the Court, the financial. He had the support of an enlightened despot, and Louis XVI was not enough despot nor sufficiently informed. The revolt of the English colonies in America in 1775, warmed the spirits in France. Any party wished to efface the memory of the disastrous Seven Years' War. On 9 May 1776, a secret council, which Turgot was excluded decided entry into the war, the 12, the Comptroller General was fired at the same time as the Keeper Malesherbes, after a ministry of less than two years. With French assistance, the insurgents prevailed in America and the Treaty of Versailles (1783) recognized the independence of the United States. But France had gained little in this war which increased the financial distress of the State. Necker, Turgot's successor from 1777 to 1781 had also yield to coalition privileged. The financial crisis deepens, the king called an Assembly of Notables (1787), which refused the necessary changes. Necker, recalled to Business (1788), was decided by the king convened the Estates General, the first since 1614. The first part of the reign of Louis XVI was marked by many reforms: establishment Mount of Piety (1777), abolition of serfdom in the royal domain (1779), suppression of the pre-issue (1780), creating the School of Mines (1783), the beginning of the dike Cherbourg and the Canal du Centre (1784), free trade in grains (1787) edict of toleration for the Protestants (1788). In general, a generation of stewards high class continues the work of their predecessors of the reign of Louis XV. But these reforms were not enough to stop the march of time. When she pointed to his representatives, the nation repudiated enlightened directors from the Board and bursaries. From 1789 to 1792, in three short years, the ancient political and social edifice collapsed irretrievably. Giant of the Grand Siècle had lived. Open May 5, 1789, the States General declared National Assembly on June 17 and August 4, abolished the ancient privileges. However, the king's brothers left the France. In October, the royal family was brought back to Paris and the Assembly followed him: now, the history of France was going to do in the Capital. The Revolution continued and, over time, Louis XVI, who approved that the transformations underway mouth, was more than the plaything of events. Returned to Paris after the failure of his flight abroad (June 1791), he had to punish the new constitution that reduced the rank of first officer of the State. The war against Austria, wanted by Louis XVI (April 1792), precipitated the fall of the regime. Accused of duplicity, the king was overthrown by the Paris riots and the Legislature had to endorse the abolition of the monarchy (10 August 1792) before giving way to a National Convention. It was before this body took place the trial of the King (December 1792-1793), who was sentenced to death, was executed January 21, 1793. With the reign of Louis XVI ends really the history of the French monarchy. No doubt there will still be the kings of France, a restoration, this "comedy of fifteen years," a French king, two emperors, probably France she put a century to be permanently in the Republic, but c is well in 1792 that broke the chain of time, uninterrupted for fifteen centuries, at the same time that broke the bond of love between the monarch and his subjects. Consistently lower than their job since their accession to the throne, Louis XVI and his wife testified of dignity and exceptional courage soon as they were going down. Their long martyrdom of August 1792 to July 1793, the crown for a monarchy, since birth, had been proud to be all Christian.