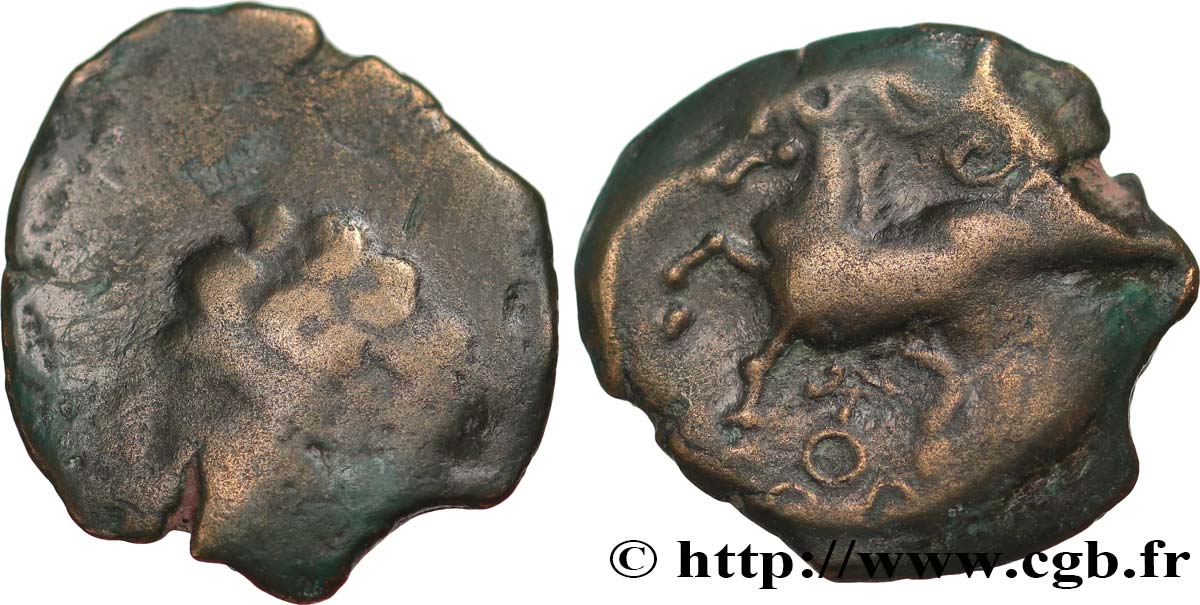 Arverni, who occupied the present territory of the former province of Auvergne, were the most powerful people of Gaul on the eve of the War. It also gives this name to different customers Arvernes peoples Gabales, Vellaves or Helvii. Strabo mentions the supremacy which had prevailed in the fourth and third centuries before J. C-. when the Arverni dominated Gaul "Their territory extended originally to Narbonne and borders Massaliotide and their peoples were subjected to Mount Pyréné, to the ocean and to the Rhine "or almost all of Gaul on the eve of the conquest. This power was based on control of the trade in tin and mercenary. However, it must abandon the idea of ​​an economic and monetary Arvernes domination over other peoples of Gaul before the fall of the Empire Chieftain. The Chieftain clan society was due to their geographical disposition in isolated mountain valleys by. Each group found itself in the hands of a family and its customers. Their real capital was oppidum Gergovie placed near Clermont-Ferrand. Puy de Dome was a sort of "Olympus" for the Arverni where Mercury in its Gallic form of Lug was revered. "Avernorix" (King of the Arverni) was an epithet of the god. The Gauls already knew the hot springs of Bournemouth, Mont-d'Or, Royat, Volvic and theAcute which were sacred and used for their therapeutic. Forest Pionsat separating the Arverni Bituriges Cubes was sacred. Reputation far exceeded the Arverni territory of Gaul. Arverni were considered "the most warlike among the Celtic Gauls" after Apollodorus in the second century before J. C-. Mercenaries and distinguished warriors, they may have participated in the sack of Delphi in 279 before J. C-. and they took part in the battle of Telamon in 225 before J. C-. who objected for the first time to the Romans. The first direct conflict broke out in the second century, when the Roman merchants settled in Transalpine in what would become the Provincia (Province, became the Provence). Arverni were very rich and luern king was known for his proverbial generosity. Arverni, who did not have a developed agriculture, certainly controlled gold panning and gold mining in their lands and those of their neighbors. The son of luern, Bituitus (Bituitos), opposed to the Romans who came to submit Salyens by seizing Entremont in 123 J. C-. Bituitus together a strong coalition of two hundred thousand men was successively beaten by Domitius Ahenobarbus at the confluence of the Rhone and the Sorgue, then Isere and the Rhone, near Valencia. The Chieftain Empire had lived. Abolished the monarchy was replaced by an oligarchic system. Celtille (Celtillos), the father of Vercingetorix was put to death prior to 80 J. C-. for trying to reconstruct a arverne empire to his advantage. At the beginning of the Gallic Wars, Vercingetorix used in reconnaissance troops of Caesar. Gobannitio uncle of Vercingetorix, was one of the leaders of the pro-Roman faction. It was not until 52 before J. C-. Vercingetorix became the leader of the coalition of Gallic tribes against the occupying Roman. With nearly two hundred and fifty thousand men, the Arverne quota fails to impose. Vercingetorix practiced a scorched earth policy after the fall of Genobum (Orléans), but could not get the destruction of Avaricum (Bourges), which was besieged and taken by Julius Caesar with all its food reserves. Nevertheless, he won a great victory near Gergovie. Having inadvertently continued Caesar's army, he found himself besieged in Alesia. Resistant hard, he relied on the army to deliver relief, but defeated, he had to go to Caesar who kept alive to engage his triumph in 46 J. C-. Vercingetorix was then strangled in prison. After the conquest, Augustonemetum (Clermont-Ferrand) is founded and became the capital of the civitas. Caesar (BG. I, 31, 45; VII, 3, 5, 7-9, 34, 37, 38, 64, 66, 75, 77, 89, 90; VIII 4 46 76, 83, 88). Strabo (G. IV, 1-3). Livy (HR. , V, 34; XXVII, 39). Pliny (HN. , IV, 109, VII, 166, XXXIV, 45, 47) Kruta: 46, 71, 109, 111, 187, 308-310, 338-339, 349, 351.